LEARNING TO SLEEP IN THE BED YOU MADE INSTALLMENT# 3: LEAVING NEVERLAND by Nichelle Wellesly
[Reviews - 10] 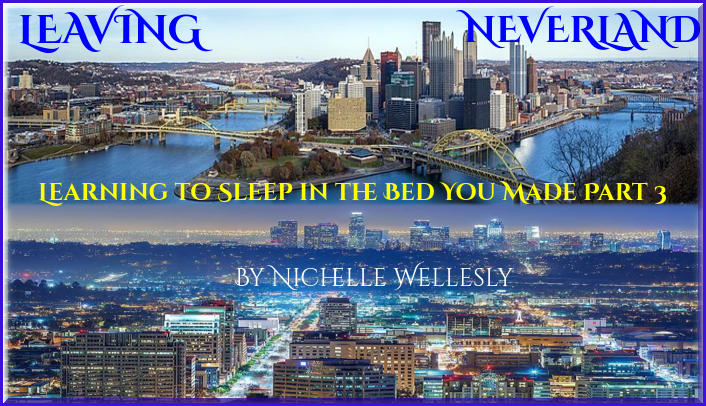 Everyone has been placed in charge of their own lives. As Brian and Justin begin to design theirs, Michael and Lindsay are having to deal with what they wanted... just not the way they wanted it.

Again, a special THANK YOU goes out to Lorie, who I find an AMAZING person to know. I seriously couldn't do what I do without you. Love you!

Sooo, if you all have been following the series, you already know how this is going to go. First things first: A brief recap of the last installment has Michael and Lindsay married to their ideals. For Michael, that is a well-off person basically in love with him. While for Lindsay, it's a well-off gay man (who is on par with Brian in every way that matters) as a husband. The problem with these two is that even when you give them what they want, they still aren't happy.

Okay, okay, okay... So in fairness, I may have had a smidge to do with it- just a SMIDGE! But sometimes in order to grow a character, you have to show them that not everything they demand is FOR THEM. This is one of those times. In the meantime, Brian and Justin are going to be popping in and out of Pittsburgh to grow their empire, but they are also officially California residents.

All I can do is remind you that they are near Hollywood, so you have to expect at least some drama. But not to worry, Team B&J will be right there to help them through it. Plus the supporting casts themselves will be moving on from the melodrama that is Michael and Lindsay as best they can. So look for some familiar faces, some new characters, and some old tunes chronically sung by a certain few. I hope you enjoy the continuation of this series!