When Mason was seven years old, his mother began having an affair with a married man. When he was eight years old, that man divorced his wife, disowned his gay son, and moved Mason and his mother into a house bigger than Mason could have ever dreamed of. By the time he was ten, Craig Taylor was officially his father. Mason had always been grateful for it, even though a part of him was always bothered by the way his dad dropped his oldest son like it was nothing. It never matched up with the man who gave him a really good life, supported his academics and athleticism, and loved him unconditionally. Well, Mason assumes it's unconditionally. It probably wouldn't be so unconditional if Mason ever fell for a guy. But Mason has always had girlfriends, girlfriends he genuinely liked and cared for. What happened to Justin won't happen to Mason. That's what Mason tells himself until he meets Ezra Heart. 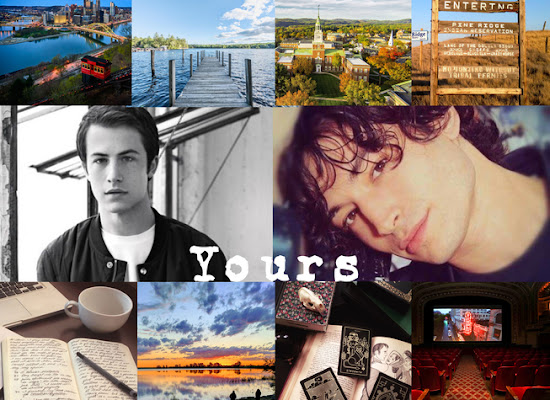 This is essentially an original work focusing on two OCs from the Intersect Universe. Mason is Justin's and Molly's adoptive brother through Craig and Ezra is his boyfriend that he meets while in college. By the time they move into Justin's building, they have been together for close to a year and a half. This story centers around their friendship and the growth of their romantic relationship. I may eventually pull this story to make cuts and edits to put out an original novel but I would like to have a beta audience before I do that, so you get the long version ;)

Both Mason and Ezra have past traumas that may be triggering for some readers. Mason's trauma is sexual in nature and has not been revealed to anyone, causing a lot of turmoil. Ezra's trauma deals with the brutal murder of a cousin he was extremely close with (a hint: Ezra and Nathan have something huge in common), the suicide of his aunt, and a previous nervous breakdown. I usually wouldn't reveal these things, but it felt important.


Mason's roommate convinces him to see a play.


Ezra has always hated working shifts at the restaurant when it's empty. It has always felt absolutely pointless. But just for tonight, he's glad he only has one person in his section.

TW for suicidal statements, financial stress, and vague references to a hate crime.


Ezra takes Mason out for his birthday.


The day after the boys have an upsetting encounter, Ezra takes Mason on a day trip.


Ezra and Mason hear even more about their questionable future from a different and unsolicited source, head to Boston, and prepare for the night ahead.


Mason begins to pull away, but not necessarily for the reason Ezra thinks.


Ezra starts to gain an understanding of what Mason has been going through, but still has a long way to go.


Ezra and Mason go on a five day lakeside getaway with their group of friends.


Since it's impossible for them to hide it, Ezra and Mason make the status change of their relationship known to their close friends before taking a big step together once they're alone.


Ezra and Mason go on their first (official) date.


After Mason receives an unexpected, confusing, and concerning call from back home, Ezra suddenly finds himself in a long distance relationship.


After Mason spends the day getting the new house ready to surprise Ezra, he gets a terrifying call.


Mason and Ezra try to have a good one month anniversary despite Ezra's injuries.