An Aussie.  Old enough to know better.  Got into QAF when S1 first aired here (2001).  Was hooked from the "unless you're Brian Kinney" moment.

The show has been one of the joys of my life ever since.

As someone who's always had gay friends and has lived through the days when gay dances were at risk of being raided by the police, has patched up my friends when they've been victims of gay bashings and lived through the early days of AIDS (which took way too many of those friends including my best friend, my soul brother, whose name ironically was Michael) the show struck chords with me on many levels.  But mainly because I know how much they would have loved it.  My lovely Michael and I would have argued endlessly over the show and the characters but he and all those others who died too soon would have loved to have seen this show which so bravely portrayed a range of gay characters, on network TV.  I've always tried to appreciate it a little more on their behalf.

I've been lucky enough to see both Gale Harold and Randy Harrison on stage and to have met a number of the cast.  I think they're an amazingly talented group.

But I will say here what will be plain to anyone who's ever read just about anything I've ever written ...

I have written diatribes on why I dislike him so much, but the short version is that I think he's totally self-absorbed and that his relationship with Brian is a toxic, not to say abusive, one.  (And I don't mean, as so many seem to think, that sweet little Mikey is Brian's victim, quite the contrary.)

If you are a  Mikey fan you will almost certainly not like the way I portray him and the way I interpret his canon actions.

I will place anti-Mikey warnings on my fics, and you should take them seriously.

I started writing back in 2002, and have been doing so more or less constantly ever since.  My stories are posted on my live journal, and on the Moonshadow Tribe website.

And I will gradually be posting them here.

A strange little Halloween fic. It's kind of about Brian and Justin, but they only make guest star appearances. The main character is Melissande. You probably know her better as Mysterious Marilyn.

Joan Kinney dies just before Christmas. Will this derail Brian's plans to spend Christmas with Gus and Justin in New York?

Canes and Planes and Christmas Pains by Wren

It's Christmas and Brian was planning on spending it with Gus in Toronto. Then Justin has an accident. What will Brian do now?

Worth Celebrating by Wren

I thought this story was very different from anything I'd read before. Very well written and could have easily been in the show. -SunshineSally

This was written immediately after S3 ended. It's canon friendly and deals with the aftermath of Stockwell's defeat and Brian's financial situation.

Justin has dreams of Christmas

Brian gets a Christmas Wish

Where's the F**king Comfort and Joy When You Need Them? by Wren

An accident sends Gus and Justin to the hospital just before Christmas.

There's a Pawn Shop on the Corner by Wren

An AU where Brian and Justin meet in college.

'Twas The Month Before Christmas by Wren 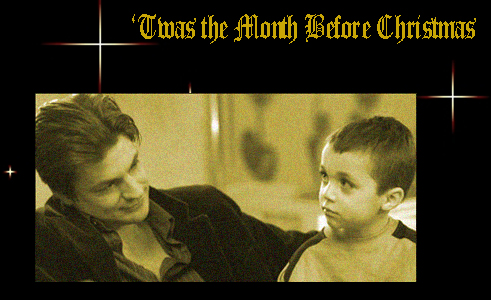 Post S5 in an AU where there is no JR (just purely because it simplified the plot).  Something has happened in Toronto and Brian gets a phone call that sends him into action.

Miracle on Tremont St. by Wren

A Christmas story about what can happen if you believe.